AFT vows to fight back against attacks on teachers, unions

AFT convention delegates on July 13 unanimously passed a special order of business—recommended by the executive council—to fight back against attacks on unions and teachers like Vergara v. California and Harris v. Quinn, and to fight forward to reclaim the promise of America. 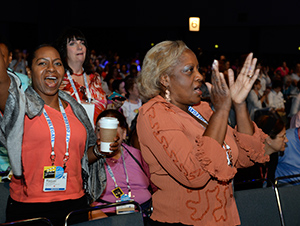 The special order characterizes these lawsuits as "contributing to an escalating and engineered imbalance in our democracy."

Amended from the floor, the order—originally drafted by the executive council—was revised to include strong language on Secretary of Education Arne Duncan, who publicly supported the Vergara decision. It derides his promotion of "misguided and ineffective policies on deprofessionalization, privatization and test obsession."

The order calls on the president of the United States to "implement a secretary improvement plan which will be based upon standing up for public education, supporting teachers and all school workers, inspiring parents and the public to join us in creating the public schools we want and deserve, and leading with us in reclaiming the promise of public education."

It asks the president to take the following actions:

It goes on to say that if "Secretary Duncan does not improve, and given that he has been treated fairly and his due process rights have been upheld, the secretary of education must resign."

AFT President Randi Weingarten made a statement following the passage of the special order:

"This special order is basically saying, "Enough is enough." Teachers are evaluated and their future livelihoods are linked to that. And when they fall short, they should have a chance to improve. And that's what this special order represents. Make no mistake about it: There's a lot of hurt that has been expressed from the floor—the feeling that the secretary of education doesn't walk in the shoes of public educators or provide the support and resources necessary to ensure all children have a high-quality public education."